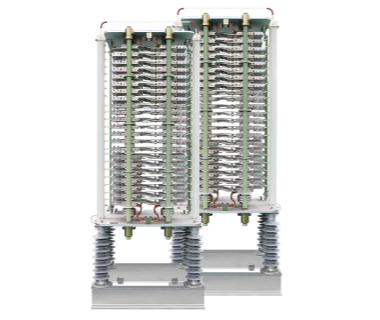 The PCS-9580 SVC system mainly consists of the following components:

The static var compensator is normally installed at low voltage side of main transformer, otherwise a step-down transformer is needed to reduce the voltage.

The medium voltage switchgear typically includes isolating switches, grounding switches and transformers. It can be installed indoors or outdoors.

The thyristor valve is the main control part in a SVC system. It is composed of several series/paralleled connected thyristors and its auxiliary components. The thyristors are triggered by photoelectric triggering system and it adopts water cooling as the main cooling method.

In practical, the capacitor/filter banks are divided into several sub-banks which can be switched by mechanical breakers or other electrical switches according to the actual situation.

The heat produced by thyristor valve will be harmful to thyristors if the heat is not dissipated in time. The water cooling system is sufficient for the thyristor valves which have a high operating voltage. The cooling system uses the de-ionized pure water for internal cooling and airwind for outdoor cooling.

The key functions of SVC control and protection system are:

Switching the FCs in order

Protecting each component to ensure the safe operation of SVC